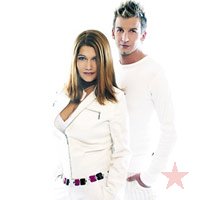 Groove Coverage is a Dance and Pop band from Ingolstadt, Germany. It was formed in the summer of 2001. The Groove Coverage project consists of Axel Konrad and DJ Novus. The lead singer is named Mell, with a back-up singer named Verena. They have had hits around the world, especially in Europe. They have produced popular remixes of several songs, including "Love is an Angel" by Sylver, "Come With Me" by Special D., and "Love Song" by DJ Cosmo Meets Digital Rockers.